This is a 14km overnight loop hike to Mt. Higashi-Akaishi (東赤石山, 1706m) and finishing at the Old Besshi Copper Mine entrance (旧別子銅山跡). The hike also passes Mt. Akaishi (赤石山), Mt. Hachimaki (八巻山) and Mt. Nishi-Akaishi (西赤石山). We stayed at the Ikanatsu Sansou (赤石山荘). The cabin is private so you’ll need to call 0897-55-4831 and make a reservation (the owner speaks Japanese so get a friend to help). See below for a full post-hike report.

Access
Trailhead: The hike starts at this location in Besshiyama, Niihama, Ehime Prefecture (Access is by car only). Since the start and finish of this hike are quite far apart you’ll need a bike or second car to ferry yourself back afterwards. Alternatively, you could return on the same path you climb up and hike back to your starting point.
Supply point:  This area is isolated with no food stores nearby. You should fuel up and buy anything you need in the nearby cities or Shikokuchuo or Niihama.

Course Information
Estimated hike time: 10-11hrs. Day 1: 4 hours,  Day 2:  5-6 hours
Season: Summer (July)
Difficulty: Fitness (Grade 2: Moderate) Technical (Grade 2: Moderate) – The first section of this hike is fairly easy with a gradual ascent that follows a river and is covered by trees. There are a few sections where the path runs past an edge where you can fall. As you approach the top of the mountain you’ll become more exposed to the elements. It would be quite unpleasant during heavy wind or rain and also quite dangerous if lightning or thunder is forecast. Once you reach the top of the mountain and start to follow the ridge westward there are a lot of large boulders which require “scrambling” and will slow your progress. The path is easy to miss if you do not pay attention. Go slowly to avoid falls and injuries.
Please see Outdoor Club Japan’s Event Grading Page for more information

Post-Hike Report
Our day began at 8am in Otoyo, Kochi. We travelled by car on the expressway to Shikokuchuo to buy food and other supplies for our hike. From Shikokucho we took Route 319 up and into the mountains. After driving through a long-one way tunnel we passed by the beautiful Kinsha Lake. From Shikokuchuo to the start of our hike took about 50 minutes by car.

We arrived at the 筏津山荘 赤石山 shelter around 12.30 with the goal of eating lunch and starting our hike by 1pm. The trail starts to climb quickly but the path is smooth and well sheltered by the trees of the forest. The hiking trail continues along a river valley, passing some waterfalls and crossing some old wooden bridges. The trail climbs away from the river and you’ll pass a few sections where the track is exposed to a bit of a ledge: don’t fall. We continued up the trail where the path eventually re-joins and crosses the river. Along this first section there are a lot of places to stop, cool off and refill your water bottle. The water is clear and refreshing and would be a nice place for a swim to escape the heat. As we get higher the temperature stars to cool but the humidity is still there. We passed a lot of Japanese hikers who were returning from the peak (day-hikers).

As we came closer to the top the tree lines started thinning and the path became more and more rocky. At this point we were about 30 minutes from the 赤石山荘 cabin. We arrived at the cabin around 4pm. The cabin itself looks to be about 50 years old and has a water supply at the back (you have to go into the bushes a bit, there is no sign or clear path, just follow the stream). Despite the damp smell we were happy to have a place to shelter and stay the night. By this stage the weather had become quite cloudy and windy so we decided to stop for the night and head to the peak in the morning. As mentioned before this cabin is privately owned so you’ll need to call the number above. We left our 2000円 fee in an envelope and placed it in the payment box. At the cabin we met three really genki Japanese hikers from Osaka Eno-kun, Ka-chan and Koujin-kun. You can see their blogs here, here and here. They invited us to join them cooking dinner and to join them on their hike in the morning. Our original plan was to return back along the path we came up to our car (as we had no way of ferrying if our start and finish points were different). Their plan was to continue from Higashi-Akaishi west along the ridgeline and down the Old Besshi Copper mine road. This option meant our hike was going to be about twice as long as we originally plan, but our new friends assured us the view would be worth it.

The next morning we woke at 6am, at breakfast, and left the cabin by 7am. From the cabin, it’s a short 20 minute hike to Mt. Higashiakaishi 東赤石山 which is the highest of the peaks along this ridge line. The clouds had cleared and the weather was spectacular! The view at the top was beautiful. From there we headed west along the ridgeline towards Mt. Akaishi (赤石山), Mt. Hachimaki (八巻山) and Mt. Nishi-Akaishi (西赤石山), moving slowly because of the very large rocks and boulders and taking breaks to enjoy the view. Be careful along here as a wrong step could cause injury or fall and lead to a serious injury. From Mt. Higashi-Akaishi it takes about two and a half hours to reach Mt. Nishi-Akaishi (西赤石山). You wouldn’t think it, looking at the distance, but as mentioned the path is slow. As we came closer to Nishi-Akaishi the path became smooth again and we were able to walk much faster. There are some wet sections that are quite slippery so be careful.

From Nishi-Akaishi the rest of the hike is mostly down hill.We continued for about 25 minutes until we reached a point along the ridgeline where you cross the old Besshi Copper mine road. We were told by our Japanese friend that miners would make the journey from the mines on the south side of the mountain to the refinery on the north face all year round. The men would carry 50kg of copper on their backs and the women 30kg. The journey originally took two days but was shortened after they built a railway line on the north side of the mountain. Still, after carrying a pack that weighed about 12kg for the past four hours it’s hard to imaging how difficult it would have been carrying 30 or 50kg! From here we followed the Besshi mine road south towards our finish. The path is well built with stones and stairs that were build for the miners. You’ll see the ruins of the mines, schools, hospitals and whole communities which are now covered by forests. Looking at the pictures it’s hard to imagine that this is the same place, and in just 60-80 years nature has taken back. For many of the buildings, all that remains are the stone foundations and brick fireplaces. It’s really intriguing.

Our final stop before we reach to finish was the pleasantly names Diamond Water (ダイアモンド水). The story goes that miners were drilling a shaft with a diamond tipped drill. The drill was left in the ground for some reason. Eventually, when they removed the drill, a giant stream of water burst from the hole. The water flow is amazingly strong and consistent, and the water is clear and refreshing after a long hike. We stuck our head and body under the fountain to cool off much to the delight of the Japanese family picknicking nearby. After returning to the finish point. One of our Japanese friends hopped on a hilarious looking fold up bike, rode back to the car, and returned to pick us up. I have a feeling the fold up bike idea is pretty popular with Japanese hikers. It’s a pretty neat idea. 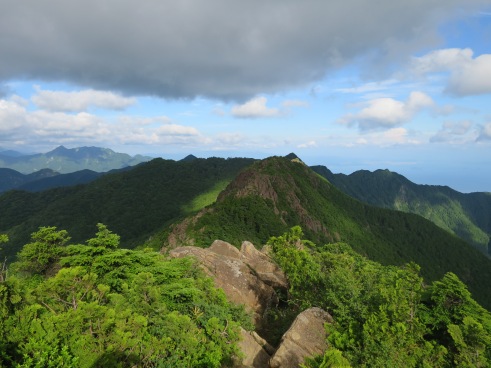 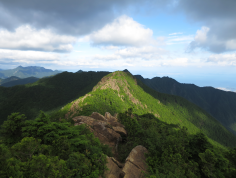 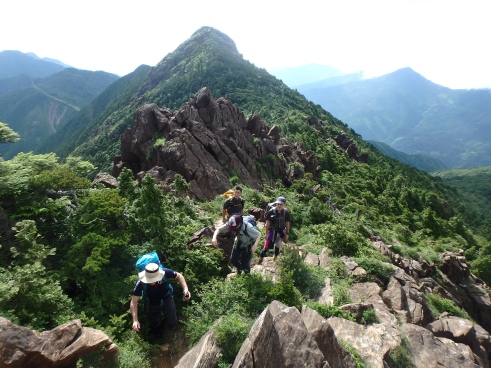