This hike to Oku Kuishiyama (奥工石山, 1516m) also Tajikawa Kuishiyama (立川工石山) starts and finishes in Otoyo-cho at the Kuishiyama mountain hut (工石山山荘). Accessing to the mountain hut is by car however it requires driving on dirt/gravel roads for 10km once you pass Tajikawa (立川). During winter the road may be covered in snow and after rain it may be quite muddy. If you do not wish to drive on the dirt road you can park further back along the trail and take the long way up (see  the maps).

The Kuishiyama cabin is free but hikers are recommended to make a donation to help with it’s maintenance. The cabin will probably be empty however there may be other hikers that you will have to share the facilities with. The fireplace is inside the building but there is no chimney. Traditional Japanese style or design flaw (or both). If you light a fire and there is smoke you’ll need to open the doors.

Access
Trailhead: Kuishiyama Cabin – Access by car only (see the post hike report for more information about our challenges getting to the start point). The trailhead is located next to the Kuishiyama cabin in Tajikawa, Otoyo, Kochi Prefecture.
Option 2: Long hike – If you don’t wish to drive on the dirt road you can park here and take the long way via the road or trail.
Suggested Meeting Point: Otoyo Convenience Store or trailhead

Course Information
Estimated hike time: 3 hrs return (from cabin)
Date/Season of Hike: Late February – Winter     Group Size: 2
Difficulty: Fitness (Grade 1: Easy) Technical (Grade 2: Moderate) – There is some rock scrambling near the top and slightly dangerous cliff faces however most of the hike goes along an easy, well marked track. The main challenge of this hike comes from the fact that since it is in winter, you will need crampons in order to walk through the snow. We used four-peg crampons and found that near the top we were slipping a little due to the snow being deeper than 20cm in place. If doing this hike in winter please take adequate precautions.
See Outdoor Club Japan’s Event Grading Page for more information

Post Hike Report
Ascent
We left Otoyo Circle K convenience store around 10am and headed towards Tajikawa along the main road. After 40 minutes we turned off onto the road which passes Tajikawa Post office here and takes us towards the mountain. It took about 40 minutes from the post office to reach the cabin. Around 20minutes after you pass the Tajikawa post office the paved road stops. From here the road was muddy and icy due in some places due to the wintery conditions and the road’s use as a logging access trail. I managed to drive on it with my tiny Suzuki Alto Kei car so if you have a Kei car and are adventurous you shouldn’t have a problem. We passed a Japanese driver in a fairly new white plate that didn’t any issue being there. That being said, if you have a large white plate/wagon you may have difficulty in some sections as the surface is uneven. Drive as far as you feel comfortable and consider walking the rest (although this will add a few hours onto the hike time). This area is pretty isolated with patchy mobile reception so if you get stuck you will have to do some walking.

After reaching the cabin, which was above the snow line, we unloaded our overnight packs and left them in the cabin. We decided to only hike with our day packs – we took crampons, warm clothes, and food for the top. We started hiking shortly before 12 lunch. The plan was to hike to the top of the mountain and return before dark. The path starts just behind the hut and slowly starts winding up through the evergreen forest. This side of the hill hadn’t been exposed to the sun and was covered by trees so a lot of snow was still laying around. I’ve found this is quite common on Shikoku. You can’s see the snow because the evergreen canopy, but in many areas above 1000m in winter there will be snow on the ground which can be quite deep. After about 40 minutes of hiking we reached the main spur which continues up to the top. Here, the snow was exposed to the sun and the snow had melted a lot.

We continued on and from here the trail got steeper, rockier and was snowy. We put on our crampons for the first time to help grip in the snow and on the rocks. There are a few sections where you could slip and fall a few metres so be careful. In some sections there are ropes to help you out but those are pretty old looking so I wouldn’t trust them too much. We passed a natural spring, one of the sources of the Yoshino River, and saw some beautiful ice formations on the rock. As you near the top you’ll reach a rocky outcrop which has a sign, a small shrine and a nice view to the cabin you started from. We ate lunch here despite the fact it wasn’t the peak of Oku-Kuishiyama. As we ate it started snowing heavily which was really amazing because most of the year in Otoyo we only get cold rain as the snow melts before it gets to the lower elevation. We were really surprised to see it snowing!

The peak is actually another short 10 minute hike up hill. It’s clear when get near because it’s definitely the highest point around. The peak itself is actually not very exciting which is why I think you often see only pictures of the ‘sub peak’ with the shrine (we also didn’t take any pictures of the actual peak, because it really did suck).

Descent:
Going back down was a little more tricky because of the snow. We needed out crampons in a few sections to stop ourselves slipping off the track. We returned to the cabin about 4.30 and set up for the night. The cabin was really nice (firewood, cooking grill, tatami mats, tables all there) however the firepit inside did NOT have any chimney and the cabin had no ventilation. We started a fire but had to put it out soon after because the smoke built up (we tried opening the big doors but that kind of defeats the purpose of warming the place up). Unfortunately this meant we were quite cold that night! Also, we smelt like bacon for days afterwards. TL;DR The cabin was nice but I have no damn idea why they didn’t add a chimney to the damn thing. 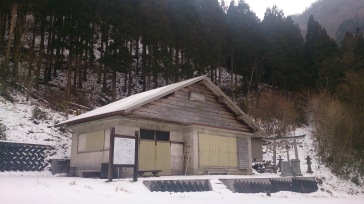 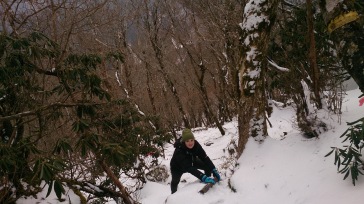 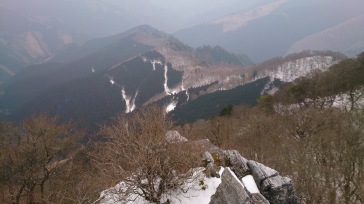